The information derives from the latest checklist of the lichens of Italy by Nimis (2016), that summarises 23 years of lichenological research in Italy, starting from the first annotated catalogue by Nimis (1993). In this period, a new generation of Italian lichenologists grew up, and several non-Italian lichenologists published many new records from Italy: more than 1200 papers appeared after 1993, which contain at least one lichen record from the country. An updated, non-annotated list of accepted taxa was published by Nimis & Martellos (2003), followed by a further nomenclatural updating available online since the end of 2007 in ITALIC, the Information System on Italian Lichens (see Nimis & Martellos 2002).
In order to facilitate comparisons with the first checklist (Nimis 1993), also that by Nimis (2016) includes: a) all of the lichenised taxa known from Italy, b) non-lichenised taxa belonging to genera with lichenised representatives, c) a selection of non-lichenised fungi which were traditionally treated by lichenologists. A complete checklist of lichenicolous fungi is in preparation by W. von Brackel, and a preliminary list, including 492 infrageneric taxa, was published by Brackel (2016).
The checklist by Nimis (2016) includes 2704 accepted infrageneric taxa, 2565 of which are lichenised. The increase in the number of taxa from 1993 to 2016 is summarised in Tab. 1. 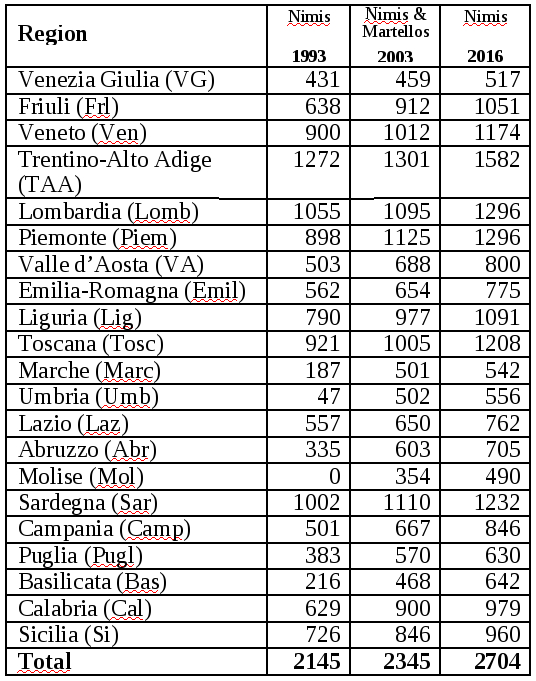