The information derives from the latest checklist of the lichens of Italy by Nimis (2016), whose text followed a structure that has permitted its rapid transformation into a database that substitutes the earlier version of ITALIC (see Nimis & Martellos 2001, 2002, 2003).


Nomenclature
- accepted name,
- reference to the accepted name, basionym and its reference,
- list of synonyms.
In the accepted names, Nimis (2016) preferred to omit all authors coming before "ex": this information, an unnecessary complication for name-users, is however provided immediately after the name.


Other data associated to each infrageneric taxon
A few morpho-anatomical characters are included, plus info on the ecology of each species, expressed in such a way as to be searchable online in ITALIC. A much richer set of morphological data, included in the database of Project Dryades (see Martellos & Nimis 2015), is being used to generate interactive identification keys, and is not presented here.

v) Commonness-rarity in bioclimatic subdivisions of Italy
Nine bioclimatic areas (OGUs) were distinguished, based on several tematic maps (elevation, precipitation etc.), and also taking into account the difference between the Tyrrhenian (humid) and Adriatic (dry) part of the Peninsula, which is relevant in influencing lichen distribution in Italy (Nimis & Tretiach 1995b, 2004, Nimis & Martellos 2002). The 9 subdivisions (Fig. 2) are:
Alp - Alpine (above treeline in the Alps and in Abruzzo)
Salp - subalpine (near treeline in the Alps, oroboreal belt)
Orom - oromediterranean (above treeline outside the Alps except Abruzzo)
Mont - montane (beech forests)
SmedD - dry submediterranean (deciduous oaks, excluding SmedH)
Pad - padanian (the plains of the North): this is the only OGU which was not separated on the basis of climatical-biogeographical characters; it is the most heavily anthropised part of Italy, where several species do not occur because of pollution and/or almost total deforestation
SmedH - humid submediterranean (as SmedD, but restricted to areas with a warm-humid climate, mostly Tyrrhenian)
MedH - humid Mediterranean (mostly Tyrrhenian)
MedD - dry Mediterranean
A commonness-rarity value (see later) was assigned to each species for each of the 9 OGUs. The related concepts of "commonness" and "rarity" are difficult to define, and hence intrinsically fuzzy ones. A given species might be fairly "common" in a narrow area, while it may be extremely rare when the area is made broader. For example, Cetraria islandica is fairly common in the Alps, rare along the Apennines, extremely rare in the mountains of Sicily, and certainly absent in the Po-Plain. There is obviously no sense in specifying its "commonness" nationwide. Here, commonness-rarity - as a first approximation - was calculated separately for each of the 9 phytoclimatic areas, on the basis of three main criteria: a) number of samples in the TSB lichen herbarium (% on the total for each phytoclimatic area), b) number of citations in the literature, c) an expert judgement used in particular cases (e.g. that of recently-described taxa for which few literature records are available, or taking into account the overrepresentation of epiphytic lichens in urban/industrial areas).
Commonness-rarity is expressed on a 8-class scale, as follows:
er: extremely rare
vr: very rare
r: rare
rr: rather rare
rc: rather common
c: common
vc: very common
ec: extremely common.
The "er" class was adopted for lichens which are known from less than five stations, and/or were not found in recent times, excluding most recently-described species, and taxonomically very poorly known taxa.

vii) Ecological indicator values
Ecological indicator values are "expert assessments" that qualitatively express the ecological range of species with respect to different factors (see e.g. Wirth 2001, 2010, Nimis & Martellos 2001). The ecological indicator values included in this book specify, for each factor and for each species, a range on a 5-class ordinal scale, as follows
pH of the substratum
1 - on very acid substrata, such as lignum and conifer bark
2 - on acid substrata, such on non-eutrophicated bark of Quercus
3 - on subacid to subneutral substrata (e.g. on bark of Sambucus)
4 - on slightly basic substrata, such as dust-covered bark
5 - on basic substrata, e.g. pure limestone
Light (solar irradiation)
1 - in very shaded situations, e.g. deep gorges, closed evergreen forests
2 - in shaded situations, such as on the northern side of boles in close-canopied deciduous forests
3 - in sites with plenty of diffuse light but scarce direct solar irradiation, such as in rather open-canopied deciduous woodlands
4 - in sun-exposed sites, but avoiding extreme solar irradiation
5 - in sites with very high direct solar irradiation, such as on the southern side of isolated boles
Xerophytism (aridity)
1 - hydro- and hygrophytic, in aquatic or marine situations, or in sites with a very high frequency of fog
2 - rather hygrophytic, intermediate between 1 and 2
3 - mesophytic
4 - xerophytic, but absent from extremely arid stands
5 - very xerophytic
Eutrophication (including deposition of dust and nitrogen compounds):
1 - not resistent to eutrophication
2 - resistent to a very weak eutrophication
3 - resistent to a weak eutrophication
4 - occurring in rather eutrophicated situations
5 - occurring in highly eutrophicated situations
The predictivity of these values was subjected to testing (Nimis & Martellos 2001), and proved to be high. However, predictivity may vary considerably among species, depending on the degree of knowledge on their ecology. For poorly known species the values are tentative, and mostly based on information available in the literature or, for species known only from the type collection, the info contained in the protologue or on the envelope of the type material. The interpretation, limitations and use of these ecological indicator values will be detailed in a forthcoming paper.

viii) Poleotolerance
This value points to the tendency of a lichen to occur in areas with different degrees of human disturbance. It is expressed on 4 classes, as follows
3 - species occurring also in heavily disturbed areas, incl. large towns
2 - species occurring also in moderately disturbed areas (agricultural areas, small settlements etc.).
1 - species mostly occurring in natural or semi-natural habitats
0 - species which exclusively occur on old trees in ancient, undisturbed forests.
Contrary to the other values, this one has been assigned to epiphytic species only, since it is useful to point out indicators of long ecological continuity of forests.

ix) Other information
Include information which is assigned to some taxa only.
Phytoclimatic range
oc - restricted to humid-warm, oceanic areas
suboc - most common in areas with a humid-warm climate (e.g. most of Tyrrenian Italy)
subc - subcontinental: restricted to areas with a dry-subcontinental climate (e.g. dry Alpine valleys, parts of Mediterranean Italy)
Parasitic or parasymbiontic, with specification of the host(s)
paras
Taxon bound to maritime-coastal situations
coast
Special requirements for water
u - in underhangs rarely wetted by rain
w - on otherwise dry surfaces with short periods of water seepage after rain
l - periodically submerged (e.g. in creeks)
Species of metal-rich rocks
m
Pioneer species
p
Poorly known taxon in need of further study
#


TSB Herbarium
The TSB herbarium contains ca. 40.000 samples, ca. 30.000 of which were collected in Italy, mostly by P.L. Nimis and M. Tretiach. 3812 infrageneric taxa are represented, and 119 envelopes contain type material for 106 taxa. An interesting feature of the Italian collections is that ca. 70% of them were gathered in the course of large field surveys devoted to the exploration of different parts of the country, e.g. Sardinia (NIMIS & POELT 1987) and eastern peninsular Italy (NIMIS & TRETIACH 1999).On these occasions, several hundred localities were visited, where both trivial and rare species were collected. This permits to use the herbarium as a first source of information on the commoness-rarity of species in different parts of Italy.
The information is organized in 14 fields, as follows:
1. Taxon name (incl. authors)
2. Continent
3. State
4. Region
5. Province
6. Locality
7. Latitude-longitude
8. Substrata
9. Altitude (in meters)
10. Collectors
11. Date of collection
12. TSB progressive number of envelope
13. Exiccatum (also including duplicates from other herbaria)
14. Further notes (Responsible of identification, chemical analyses, presence of other species on the envelope, type material, etc.)


Local Databases
The checklist of Italian lichens reports only the presence/absence of a given taxon in the administrative regions of Italy. In recent years, some authors started the compilation of regional checklists which contain, for each taxon, detailed list of localities, subdivided by administrative provinces or even by geographical regions within a province. More regional checklists are likely to be published in the next future. Such checklists contain important information which is not included in the general database, and have been made searchable in the form of simple databases constructed on the basis of the respective text files: the texts were subdivided into three main fields:
1. species name
2. List of localities
3. Notes, when present


Archive of images
The information attached to each image is limited to:
1) Taxon name
2) Author of the image
3) A keyword describing the detail shown in the image (e.g. "habitus" "soredia" "spores". etc.)
4) A short note describing the image (optional)
5) The (optional) specification of the herbarium sample from which the picture was taken.
More images can be available for a single taxon.


Predictive Distributional maps
Lichens have very broad distributional ranges, almost without narrow-ranging endemics. This makes the elaboration of "predictive distributional maps" an interesting and fruitful endeavour. Such maps show the relative probability of encountering a given species in a given part of the country. Those included in this archive (Click here for an example) are automatically produced by crossing information from the database with a GIS-based map. The database provides two main types of information:
- presence/absence in the 21 administrative regions (Fig. 1).
- commoness/rarity in the 9 phytoclimatical subdivisions of the country (Fig. 2),
The overlapping of the 9 phytoclimatical areas upon the administrative regional borders produces a map with 97 OGUs. The automatic connection between the information from the database and that map creates predictive maps for all species, where the 8 commoness-rarity classes are depicted with different shadings, with a single constraint: if a species was never reported from a region, all of its area remains white.
Predictive maps are subject to rapid change: at every updating of the general database many of them are likely to change (e.g. when a species is found as new for some regions); this gives an "added value" to the all too often underestimated floristic papers: any, even trivial, species found as new to a region contributes to a better image of its country-wide distributional pattern.
A forthcoming paper will explain the methodology in more detail, and will show how to test the predictivity of the maps against "real" distributional data (e.g. deriving from computerized herbaria and regional checklists). 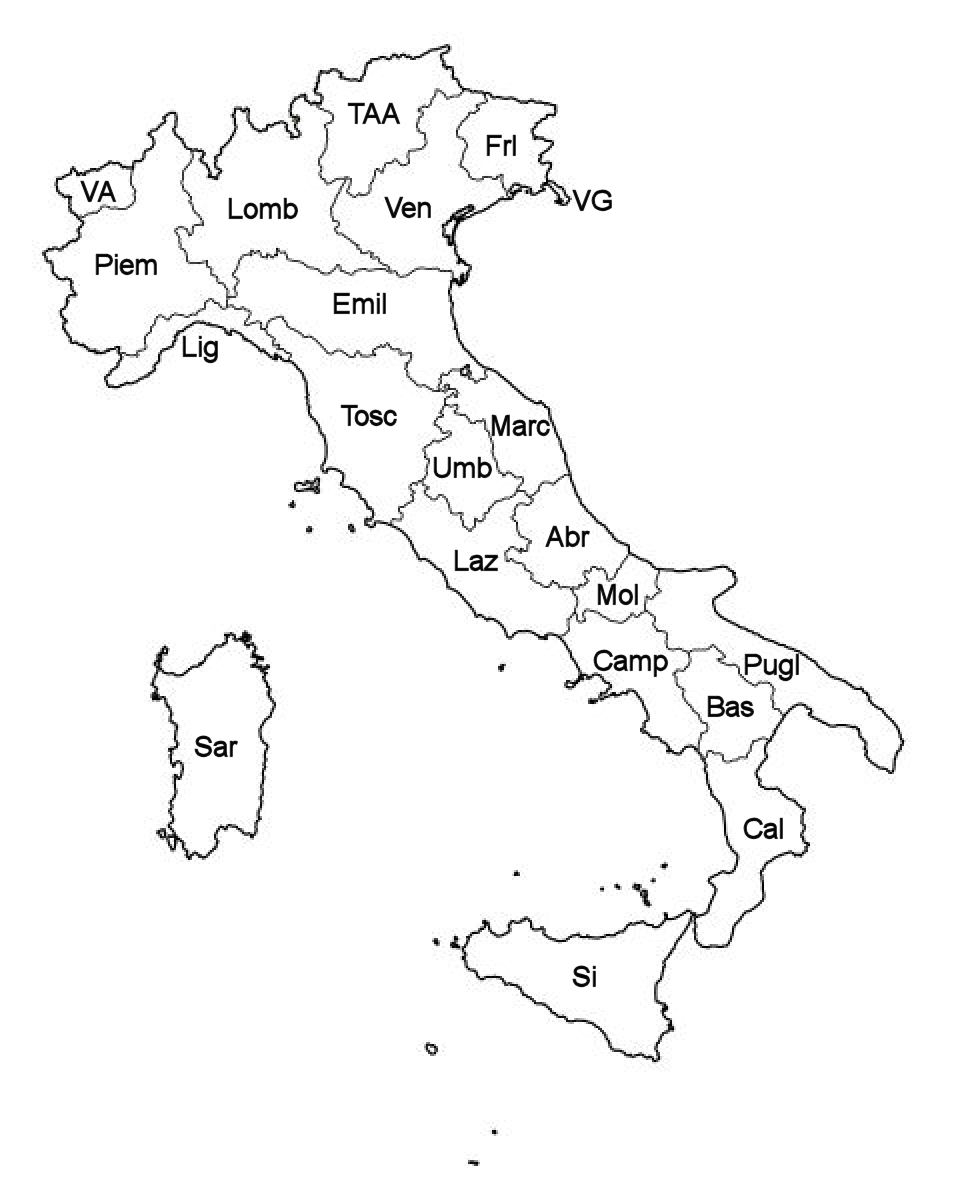 Fig. 1 - The 21 administrative subdivisions of Italy (abbreviations as in the main text and in Tab.1). 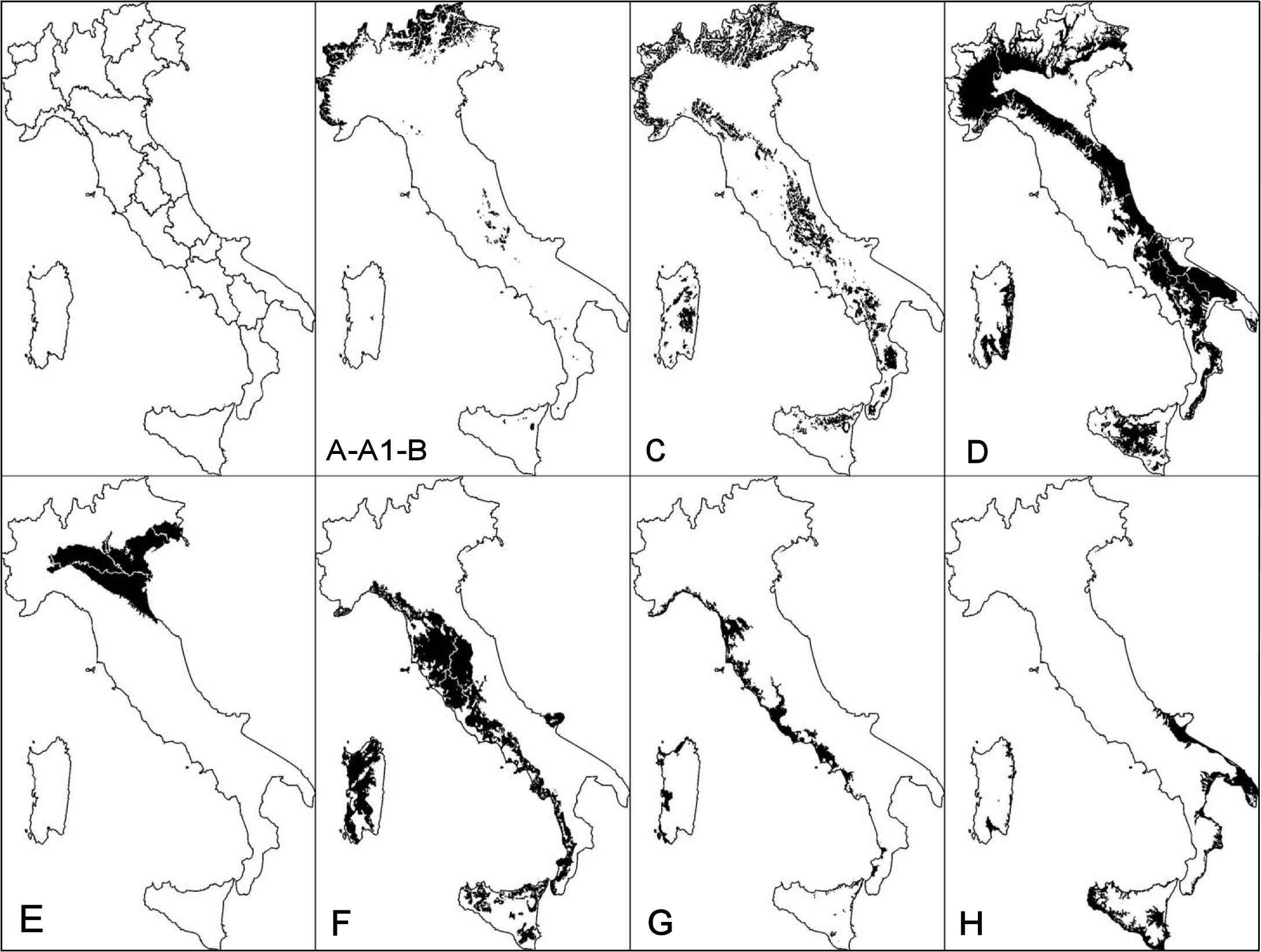